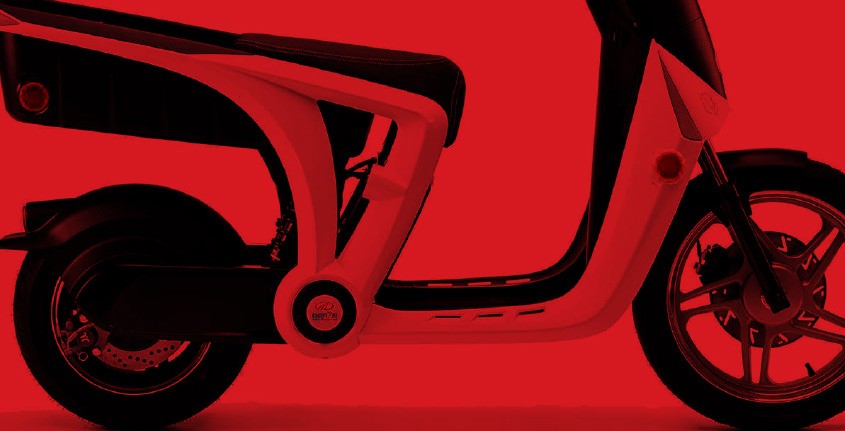 Strategic Transformation in the Transportation Market

Jam-packed city streets mean lots of wasted time and fuel for millions of Americans. According to the 2015 Urban Mobility Scorecard, congestion on city streets and highways caused U.S. commuters to collectively waste more than 3 billion gallons of fuel and nearly 7 billion hours last year. For every rush-hour commuter, this amounts to an extra $960 in fuel costs and 42 hours in delayed travel a year.

Seeing an unmet need, Indian manufacturing giant Mahindra Group formed an American team to build a small, inexpensive and eco-friendly alternative to street-clogging four-wheelers: an electric scooter. It’s a bold step for the $16.9 billion company, known for its SUVs, small aircraft and tractors. Its U.S. presence has been limited to sales of tractors and other commercials, although it seriously contemplated exporting its trucks and SUVs a few years back.

Mahindra GenZe, headquartered in California’s Silicon Valley, is the unit of Mahindra charged with executing the company’s urban scooter vision. GenZe is a combination of the words “generation” and “zero,” underscoring the company’s focus on providing transportation to future generations who value zero-emission vehicles.

Vish Palekar was personally tapped by Mahindra Chairman Anand Mahindra to lead the company’s urban market gambit. As president and CEO of GenZe, Palekar views the electric scooter as a potentially disruptive force in the U.S. transportation market. At $3,000, it’s dramatically cheaper than a new car and priced to match popular gas-powered scooters.

He says urban-dwelling millennials, who increasingly eschew car ownership, are prime targets for the nimble GenZe, which was unveiled in May 2014.

Startup From the Top

“The exciting thing is we’re a startup in a large company,” Palekar says. “That itself is an innovative business model, because most corporations have a huge amount of difficulty allowing startups to flourish, given their process-driven approach.”

Palekar says GenZe has recruited a talented, passionate team in the U.S.

Mahindra’s drive to help reinvent the urban mobility market in the U.S. comes right from the head of the organization. “Innovation, like most things, starts at the top,” Palekar says. “If the top person doesn’t personify it, it’s not going to happen. Anand Mahindra himself is a great innovator.”

The company’s verve for strategic transformation and innovation is not only driven from the top but from its very center, Palekar says. “You really can’t find innovation unless you have a strong core. Most companies—especially startups—that just keep moving from idea to idea to idea, fail because they really haven’t created a core.”

Innovative ideas grow incrementally from Mahindra’s core, Palekar says, but they also arise in the so-called white space of a market, or gaps in existing product lines. “We need to have incremental innovation, because those are lower-risk wins. But we also know that we need white space innovation like GenZe, because that’s how you become a leader.” 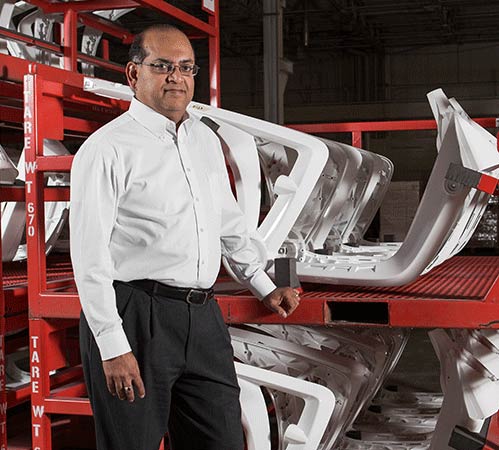 “People don’t necessarily want to own cars,” Palekar says. “They want to share, and they want to use different means of transportation. They don’t want to be held back because of unavailability of certain things.”After analyzing transportation habits in the U.S., Palekar and his team identified a vacant “middle space” in the automotive market that GenZe could occupy: a sweet spot between bicycles and vehicle-sharing services, and car ownership.

Through market research, GenZe found consumers wanted a different means of transportation for congested urban markets and created the GenZe 2.0—a 210-pound electric scooter that can travel a minimum of 30 miles and up to 30 mph on single charge.

Palekar believes the product will help consumers overcome their skepticism of electric vehicles in the U.S., where carbon-fueled car culture got its start. Some 88 percent of American households own a four-wheel vehicle, compared to only 6 percent of households in India, where most are accustomed to getting around on two wheels.

“What is needed to make this a transformational exercise in the U.S. is awareness and people experiencing the product,” he says. “Unaided selling, where we just put a product out there, is not a successful way to introduce a new product like this.”

The company sponsors “Show Me the City” to give people the chance to try the scooters out. The free events are held in cities throughout Oregon, Michigan and California.

“We need to have incremental innovation, because those are lower-risk wins. But we also know that we need white space innovation like GenZe, because that’s how you become a leader.”

GenZe introduced its electric scooter in May 2014 but did not ship its first inventory until October 2015. Distribution through dealers is planned. Prior to the first delivery, GenZe partnered with influencers in the automotive and technology industries to help spread word of the new entry to America’s streets.

It also courted fleet operators who are adding electric scooters to their mix of vehicles. “We have to create the market, and that requires very strong advocacy, engagement and experiential trial with consumers,” Palekar says.

GenZe faces competitive challenges, ranging from vehicle-sharing services like Zipcar to other electric scooter companies such as Germany’s GOVECS and gas-powered scooter-makers such as Italy’s Vespa. GenZe priced its scooter at $3,000 to roughly match the price of Vespa’s.

“We are playing to the consumer market, where it’s often about a price decision,” Palekar says. Matching the price tag of gasoline-powered scooters puts the emphasis on the product itself.

Still, he doesn’t see the scooter market as a zero-sum competition.

“It’s not just about the product. It’s about the solutions for urban mobility,” he says. “The market for these vehicles today is not about taking market share from anybody. It’s about growing the entire market. There is the need to support the scalability of a nascent industry.”

Palekar draws many of his leadership lessons from his tenure at General Electric last decade. “It’s an amazing company, where you learn how to run a business and how to work to win,” he says. “You don’t back off, because winning is not about just the home run. Winning is about every single—home runs come once you get the singles.”

Palekar, a native of India who has a Ph.D. in chemical engineering from the University of Pittsburgh, started at General Electric in 2000.

His first role was as a product manager focused on emissions technology, and he worked his way up to president and CEO of GE Enterprise Solutions, India—his first CEO role.

However, after GE’s security automation business—which made up a large portion of Enterprise Solutions—was sold to United Technologies in 2009, Palekar was jobless and faced a pivotal decision: Should he stay in India, where he had little knowledge of running an Indian-based business, or move back to the U.S., where he was educated and launched his career?

He decided to stay in India. “I said to myself, ‘Maybe there’s an opportunity to learn something here.’ I had never really worked in an Indian business. I had come to the United States at an early age to go to grad school.”

“If you can keep learning at a pace that’s faster than the rate of change, you’re always going to be ahead of the competition.”

After Anand Mahindra sent him an email encouraging him to stay in India and work for his company, Palekar became CEO and director of Mahindra Cleantech—growing the solar company into a half-billion-dollar business within three years.

Two years later, he became the senior vice president of Mahindra’s innovation program—reporting directly to the chairman. In 2013, Anand Mahindra asked Palekar to lead the GenZe project, and he moved back to the U.S.

Although GenZe has about 40 employees in Michigan and 25 on the West Coast, it’s a very flat organization. “That’s the beauty of a startup,” Palekar says. “We don’t have anybody who can hide behind their desk. Everybody must stand up and contribute.”

[Mahindra] chairman Anand Mahindra is “more of a guidepost who stitches efforts together from a brand standpoint.”

Yet even with his varied executive experience, Palekar still considers himself a student. He’s never forgotten a formula he learned at GE: L > C.

“In other words, learning has to be greater than the rate of change,” he says. “If you can keep learning at a pace that’s faster than the rate of change, you’re always going to be ahead of the competition. That’s true for every job, every day. I didn’t come into the solar job an expert at solar. And I didn’t come into the scooter business knowing much about it.

It’s called Mahindra Group for a reason: It’s not a centrally operated conglomerate. Rather, the firm comprises 10 companies operating under a single brand. Since its founding in 1945, Mahindra has evolved from a steel-trading company to a global industrial powerhouse serving 20 sectors with a presence in more than 100 countries and a workforce of more than 200,000.

Vish Palekar, president and CEO of Mahindra GenZe, says the company operates differently from his former employer. “General Electric is run as a conglomerate, which means that the chairman and CEO of the company is equally involved in operations across the company,” he says. Mahindra, on the other hand, is a federation of companies; individual businesses are empowered to chart their own course and each has its own board. Chairman Anand Mahindra is “more of a guidepost who stitches efforts together from a brand standpoint.”

Palekar describes Mahindra’s culture as less top-down than what he experienced as an executive at GE. “General Electric was probably more directive. Mahindra, on the other hand, is more collaborative and bottom-up.”

He finds his current role overseeing the launch of an electric scooter in the United States a bit spoiling. “It’s just incredibly fun. But it’s also a huge amount of responsibility. A large amount of money has been entrusted to GenZe, and we have been allowed to do certain things. It’s humbling, in a way, to make sure the brand holistically represents everything that it should — GenZe is the torchbearer of the Mahindra brand in the United States.”