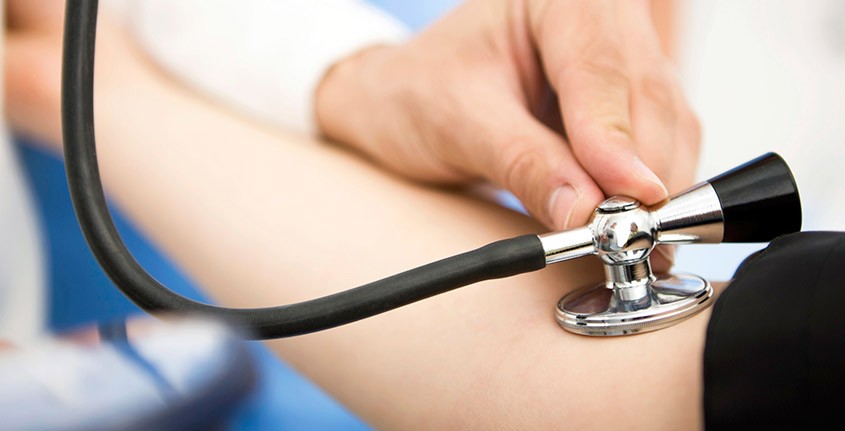 In 2009, the management team at AstraZeneca embarked upon an unprecedented and, in hindsight, wholly unrealistic goal. The multinational biopharmaceutical giant had set out to deliver an initial submission for approval of the lifesaving drug, Brilinta (known in scientific circles as ticagrelor) within a timeline of just 60 days. Brimming from their excitement over the positive findings from a comprehensive, three-year study demonstrating that Brilinta was more effective than Plavix in preventing heart attacks and death, they were more than eager to complete the new drug application (NDA) process. The hope was that a quick approval in the U.S. and Europe would accelerate the drug’s time-to-market and broad availability.

The excitement swelling around Brilinta was justifiably palatable, according to Sandy Fitt, who was leading the clinical development team at the time. Results from a mega, international, head-to-head Phase III trial titled PLATO (a study of PLATelet inhibition and patient Outcomes) had conclusively demonstrated Brilinta’s positive impact on survival for acute coronary syndromes (ACS), which includes a group of symptoms for any condition (such as unstable angina or heart attack) that could result from reduced blood flow to the heart. Brilinta, an oral antiplatelet treatment, works by preventing the formation of new blood clots, thus maintaining blood flow in the body to help reduce the risk of another cardiovascular event.

To this day, PLATO, which recruited 18,624 patients in more than 43 countries to analyze the efficacy, safety, and tolerability of the drug, is considered one of the most comprehensive worldwide clinical trials ever conducted. Only six percent of clinical trials are conducted on a worldwide scale, typically with smaller populations. Armed with extensive, promising data from the PLATO study, which was initiated in October 2006 and completed by March 2009, the AstraZeneca management team elevated Brilinta to the top of its development list. Convinced it would save the lives of many patients when approved, they launched a cross-cultural project with an extended team of 45 members to fast-track the submission of the findings to health authorities in record time. 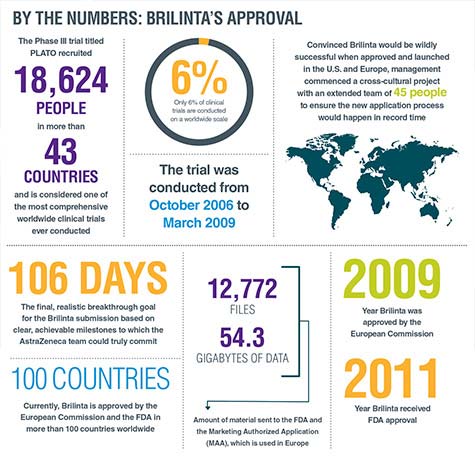 The herculean efforts of Fitt and her team were rewarded with approval for the drug from the European Commission in 2009, marketing it under the names Brilique and Possia. The FDA requested additional analysis of the PLATO data before approving Brilinta in 2011. Currently, the drug is approved in more than 100 countries. The story of how Fitt and the team, working with Insigniam, led the rollout of dual applications to bring Brilinta to market is a study in breakthrough thinking, innovation, teamwork, and persistence.

The AstraZeneca team issued its initial 60-day challenge to deliver the new drug applications to the U.S. and Europe by working with an internal Lean Six Sigma expert. The team responsible for execution decided that an 85-day target was more reasonable, but they were highly skeptical that the revised timeline would be met, says Fitt. “Authentic alignment and commitment were not there, even at 85 days,” she explained, “but no one would speak up and be honest with the senior leadership. It was a very passive aggressive culture.” Making matters worse, the team had a notable lack of experience with conducting submissions.

Given the prodigious scale of the task, Fitt’s strategy involved coordinating with Insigniam to conduct its Breakthrough Project process, which focuses on revealing and disengaging from the hidden beliefs, assumptions, and presuppositions from the past that prohibit unprecedented performance in the future. “We had an exercise where team members were able to say what they needed,” she said. “When we gave them permission to be authentic,they felt their voices were listened to for the first time, and they started believing in the possibility of being successful.”

In her role as the team leader, Fitt’s next step was to stand up for her team with senior leadership, framing it as a high- performing team that could work together and commit to an achievable breakthrough goal. To do so, Fitt had to establish a perspective for the team that would create a new work environment or context for the project. “All work happens in a non-physical environment of beliefs, opinions, assumptions and, most importantly, views of what is possible in the future,” says Insigniam partner Jennifer Zimmer. “That environment sets a context that is decisive in determining the range of results that are possible.”

Through the process, Fitt had to “unhook” key issues that set a context that would prohibit success. The prevailing environment emerged from several issues and could be summed up as “The Blame Game.” Among these issues were:

After clearing the air of the issues that were holding back breakthrough thinking, the process steered the team to invention and implementation achieved through an intensive, two-day period of discussion. Thanks in large part to Fitt’s guidance through much productive debate, the team built a new context. Instead of focusing on “who’s right and who’s wrong and why it can’t be done,” they rallied around the theme, “With patients at heart: be brilliant, be bright, be best.” Inspired by their new sense of purpose and now accepting full accountability for the success of the project, they adopted the theme as their motto, encouraging each other to keep the patient imperative at the forefront of their efforts. Alignment also was formed by replacing the 85-day timeframe with a final, realistic breakthrough goal for the Brilinta submission of 106 days, based on clear, achievable milestones that the team could truly commit to moving forward.

GETTING TO THE GOAL

The next challenge centered around bringing the new context to life and engaging the work team on the still highly aggressive timeline. Inspiring them to believe in the goal was the first hurdle. Once again, Fitt led the team through the process of creating an innovative pathway for strategic breakthrough outcomes aimed at achieving the 106-day goal. By seeing the possibility of delivering in the 106-day window, she reports that they felt inspired to “roll up their shirt sleeves and make it happen.”

An “A team” or steering committee was established to create accountability within the project. Each leader on the team was accountable for a piece of the deliverables. Guided by Fitt, they met three times per week during the delivery phase to review progress, discuss issues, and mitigate risk. Through a roles and responsibilities exercise, they mapped out 16 work streams and clarified the downstream roles and responsibilities for the 45 team members who would ultimately be accountable for delivering the work.

Along with Fitt,the team also included five project managers responsible for overseeing multiple contacts in the work streams to ensure successful implementation of the highly complex plan. In particular, timelines were tweaked constantly due to conflicting priorities or issue management. “I made sure the team was aligned on the interim milestones,” she explains, “and as we met them, I made sure this was communicated broadly to demonstrate that we were working according to plan. We even had a chart displaying progress for everyone to see.”

Delivering on the milestones created trust with executives and bonding among the teams. “You could see everyone truly working together, helping each other, having each other’s back. They would do anything for each other.”

Sustaining momentum became the clear challenge as the project progressed and became more grueling. A huge part of Fitt’s responsibility was remaining bold and decisive,continually inspiring the team to unrelentingly pursue its goal and stay connected to the purpose that the team invented. Encouraging collaboration and holding everyone accountable motivated the team to stay focused and work hard, while strengthening their drive and dedication. She continually reminded them that their efforts were all about making a difference for patients. “The faster we could get Brilinta into the hands of the people who needed it, the more lives would be saved,” she says. “We had to do our very best to get it out the door.”

Engaging top leaders to maintain their motivation was also a necessity while managing barriers and roadblocks that inevitably cropped up. Fitt called on the Insigniam Breakdown Methodology and Toolkit to manage and resolve every issue as they arose during the process. One particularly challenging breakdown centered on the sheer size of the submission; the study report was over a million pages and taxed the limits of the computer systems and software. “On a regular day, it was overly complicated to reach the computer support desk,” Fitt explains. “Because we knew about prior breakdowns, we sought the support of management and created a task force for swift issue management, establishing a ‘white glove service’ for technical support 24-7.”

Predictably, multiple technical breakdowns occurred while preparing the new drug applications for the U.S.Food and Drug Administration (FDA) and the Marketing Authorized Application (MAA), which is used in Europe. “Because we had a backup plan, we were not delayed significantly,” Fitt says. “We sent 12,772 files for a total of 54.3 gigabytes of data.”

Ultimately, Fitt and her team successfully delivered the findings of this large drug development program on time and on schedule. “The approval of Brilinta ensures ACS patients worldwide have access to this important medicine, ultimately saving lives,” she says. “None of us who worked on this project were the same people after it was complete. We met the goals and everyone grew a lot as a result of the experience. It was a personal achievement and it resulted in a lot of professional development for everyone who touched it.”