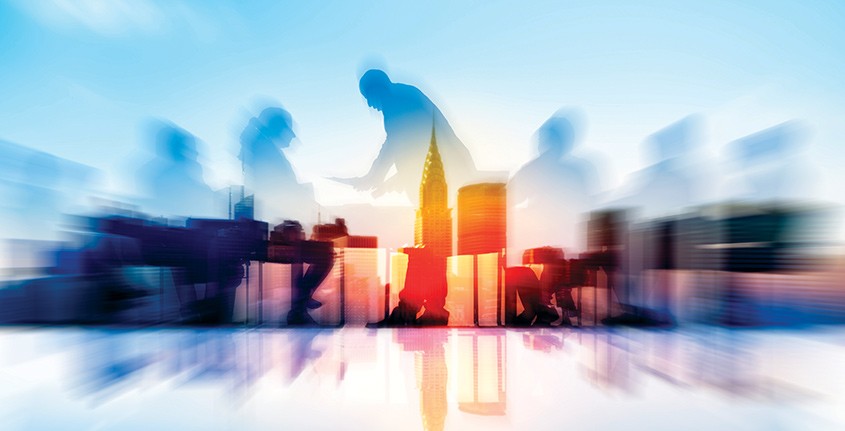 How the Board Deals with Disruption

When Borders shuttered its doors in 2011, then-CEO Mike Edwards released the following statement: “We were all working hard toward a different outcome, but the headwinds we have been facing for quite some time, including the rapidly changing book industry, e-reader revolution and turbulent economy, have brought us to where we are now.”

That makes the company’s bankruptcy sound inevitable. The truth was, Borders’ management—including a boardroom that saw five directors resign in 2009—had failed to transform in the face of major disruption. In the early 2000s, Amazon was growing, e-readers were making a splash and digital downloads were eating into CD and DVD sales. In the face of these shifts, Barnes & Noble, Borders’ biggest competitor, invested heavily in its website, launched an e-reader and diversified its revenue streams. 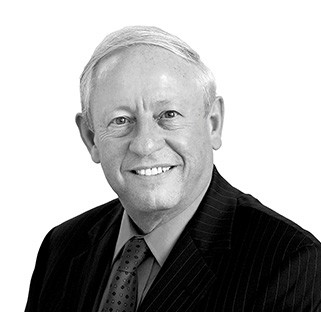 “Boards have no real emotional commitment to the current direction of the firm. They are in a position to be more objective about what is happening.”

—Ray Gilmartin, former chair, CEO and president of Merck & Co. and a former director for both Microsoft and General Mills

Borders, on the other hand, outsourced its web presence to Amazon to manage, waited too long to join the e-reader trend (it released its version three years after Amazon and a year after Barnes & Noble) and added more brick-and-mortar stores to its lineup. By the time the company acknowledged it would need to expand its website and e-book foothold, cut down on inventory and differentiate the customer experience to survive, it was too late.

Borders’ story is not unique. Many incumbents fail to realize that change is taking place, according to Ray Gilmartin, former chair, CEO and president of Merck & Co. and a former director for both Microsoft and General Mills. He argues the board, however, is uniquely positioned to spot those unforeseen and slow-growing threats and act in the face of that change. “Boards have no real emotional commitment to the current direction of the firm. They are in a position to be more objective about what is happening. The tendency of good management is to explain away events that are occurring. Boards can be an effective counterweight to that. Through their objectivity they can explore [disruptive innovation] a little differently.”

Beyond ‘Review and Concur’

In the five years since Borders went under, the boardroom has changed. Disruption is now a ubiquitous term, and boards are putting more time and focus on strategy. According to KPMG’s September 2015 Global Boardroom Insights, 53 percent of directors say their board’s involvement in the formulation and consideration of strategic alternatives has increased in the past two to three years. And 24 percent say boards are spending more time testing the ongoing validity of the fundamental assumptions that help to form strategy.

Mr. Gilmartin, who is now a member of the board for the National Association of Corporate Directors, adds that most boards are moving away from a “review and concur” approach, toward one in which strategy discussions are a continual process throughout the year. This provides more opportunity for boards to discuss and advise on potential threats.

But first directors must be able to recognize disruption—and that means understanding what it is, and what it is not. It is tempting to label any business variable or unforeseen market upset as a disruption, which is why Mr. Gilmartin recommends boards create a framework from which to view challenges. Being on the same page in identifying these forces is the first step to being in sync when the board and management team address them, he says. 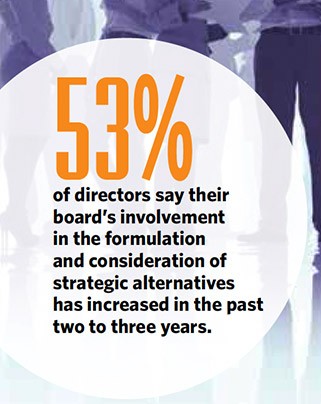 The biggest disruptions can stem from companies that are not even considered competitors. For example, Mr. Gilmartin says a potential disruptor may be at work on your customer base but not included in competitor analysis because of its unfamiliar business model, small size or outsider status. By the time management sees the threat, “incumbents either respond too late or by leveraging their strengths, which don’t apply to the new marketplace.” Boards should be on the lookout for red flags such as flat growth in their company and industry despite gains in the economy, he says.

It is also important for board members to have an in-depth understanding of industry trends as a way to spot potential disruptors.

Prior to joining the boards of Southwest Airlines and Honeywell, Grace Lieblein served as vice president of global quality at General Motors. She says management would take their board of directors to auto shows to see firsthand what competitors and others in the industry were doing. Not only do such events promote knowledge, but they also foster a greater consensus among board members about where an industry is headed and the company’s place in it.

Ireena Vittal, an independent board director for several billion-dollar global corporations, including Wipro, Compass Group and Tata Global Beverages, recommends directors seek to understand the industry from various perspectives, such as serving on boards in different sectors or geographies and seeing global operations at work in person. According to the New York Stock Exchange’s survey What Directors Think 2016, 83 percent of directors say industry experience is their No. 1 criterion when vetting potential new board members—even more than financial experience or CEO experience.

“Make sure you belong to different worlds, make sure that you’re seeing it and not just reading about it,” Ms. Vittal says. For example, if you have mining operations in China, visit those sites and tour the facilities. And if necessary, hire or bring in people who have experience in those different worlds to educate other board members.

There are those who will respond to disruption in an effort to “not lose,” while others will be in the game to win. This is a vital distinction. When a management team wants to explore a new frontier caused by disruption, the board should ensure it is for the right reasons.

“Just because there’s some shiny new object out there does not mean you have to pursue it,” Ms. Lieblein says. The board’s role is to remove any emotion and proceed from a point of data and analysis, asking: Does it align with company strategy? What is the risk of not pursuing this line of business? What are our competitors doing?

The decision of whether to transform in the face of disruption is something Ms. Vittal contends with on one of her current boards. The company has dominated the middle market for 20 years, she says, but consumer preferences have changed, and people are migrating to premium products. The question is: Should the company reinvent itself as a premium brand and risk its established position, or stay with its existing market and risk a premium brand moving into its turf down the road?

Ms. Vittal says the board is working to focus the lens on the “new normal” and offer perspective, but ultimately it is the leadership team’s responsibility to make the call. “I’m not supposed to have the answers. My role is to ask the questions” and keep the conversation going, she says.

“Disruption just is; it’s a fact. I’m not sure disruption should evoke a negative emotion.”

Once an organization does decide to invest capital in a disruptive line of business, the board should ask the hard questions there as well, such as, “How would we approach this market as a startup in this space?”

“Be very careful about controlling costs initially as you learn and prove the business model,” Mr. Gilmartin says. “Once it’s proven, accelerate the resources.”

In the end, disruption needs to be approached with some caution, but boards need not be apprehensive about it. Click To Tweet“I haven’t been on any boards where disruptions have been judged as good or bad. Disruption just is; it’s a fact,” Ms. Vittal says. “I’m not sure disruption should evoke a negative emotion.”

By viewing disruption as an inescapable part of doing business, a board can help management get over any surprise or fear and focus on what they are going to do about it.