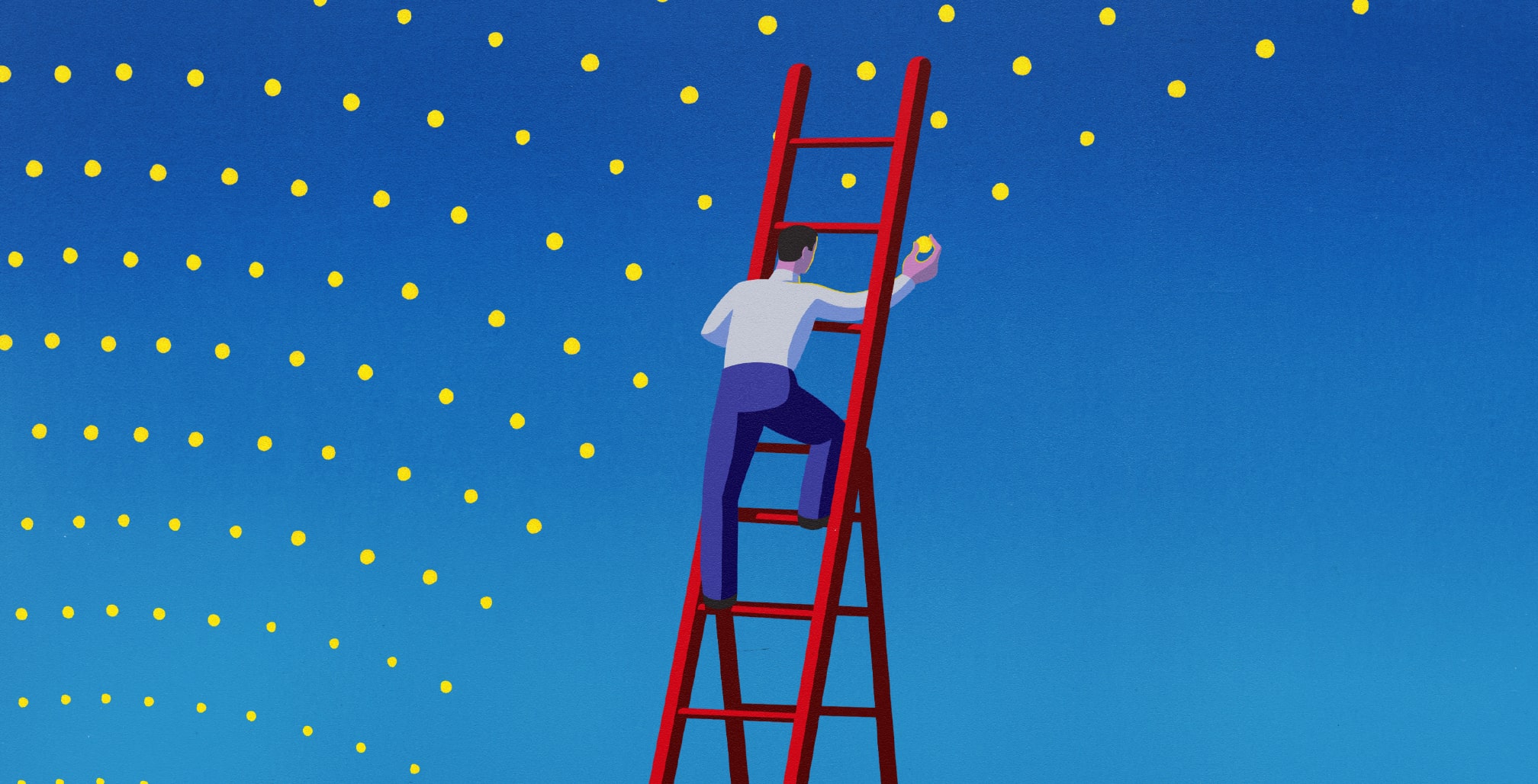 Business InnovationIQ Insigniam Quarterly® Magazinemore from Up Next: Foresight 2030 issue

On paper, it looks like businesses are raking it in. Since the Trump administration’s 2017 tax plan came into effect, corporations have been buying back stocks at a record pace—totaling an all-time high of $1 trillion in repurchases in 2018 alone. As a result, many U.S. companies have been able to steer excess cash to shareholders. But the cause of this buyback binge runs deeper than changes in the tax code. It is also a reflection of the short-term outlooks pervading many C-suites. In pursuit of boosting stock prices and beating quarterly earnings expectations, many companies give short shrift to R&D investments. Over the long haul, management short-termism can do deep harm.

“It was hard to be long-term,” FCLTGlobal CEO Sarah Williamson said at a July U.S. Securities and Exchange Commission event on the impact of short-termism on managing public companies. Pointing to the 2008 financial crisis for reference, she explained that though many companies with shortsighted strategies fared better immediately after the crisis, those that operated with a long-term approach fared much better in the long run. “If those short-term companies had been able to behave like those long-term companies over that time period, we would have created an additional trillion dollars in wealth and an additional 5 million jobs in this country.”

Innovation, rather than stock buybacks, is what creates lasting value and propels companies into the future. But too many people confuse incremental (or quarterly) growth for true leaps forward—perhaps because the former requires fewer risks and smaller challenges. It is harder to see brand-new avenues of growth than the next step on the path you have been walking on for some time.

There are four frontiers of unexplored potential that bridge the gap between today’s status quo and tomorrow’s possibilities. The first three are commonly known in business. What is less understood is that if you pursue the fourth, most ambitious horizon, the remaining three will always fall into place.

To produce dramatic results, companies must reach Horizon 3 and push for Horizon 4. But few actually get there, because such triumphs require radical ideas followed by radical action. Pursuing these kinds of radical, bold, GameChanging ideas takes an incredible amount of conviction, persistence, determination and fortitude. Click To Tweet

Creating the future requires a monumental change in the way you think. You must recognize and fight back against drift, the momentum that pulls strategy and performance in the same direction it has always gone.

Given the frenetic pace of change in today’s business world, the leaders of tomorrow must focus on long-term growth by fundamentally and sustainably changing their company and their industry. In essence, they have to rewrite the rulebook.

To produce dramatic results, companies must … push for Horizon 4. But few actually get there, because such triumphs require radical ideas followed by radical action.

But most organizations have sacred cows: unexamined assumptions and beliefs that are usually not spoken about and live in the background of a conversation. To rewrite the book, leaders must be able to master their industry’s prevailing philosophies to adequately identify the basic assumptions and false logic upon which this dogma is based. These are the sacred cows that everyone accepts without question.

The next step, as you may have guessed, is to unceremoniously dismantle these ideas through persistent, even irreverent questioning: “Why this…?” “How do you know?” and “What if…?” Repeat this line of questioning, and you can cut through the fog.

It is a crucial step that is often missed during the nascent phases of strategy brainstorming. “Are you asking for ideas for a new umbrella or a way to stay dry in the rain?” is an example Stanford University professor Tina Seelig gives on her blog. An expert on creativity, Ms. Seelig understands that uncovering your false assumptions is the first step to making a radical leap forward. “Are you asking for a better suitcase or a way to have the things you need at your destination?”

This is echoed by Tim Bailey, executive vice president and president of global product supply, business services and technology, and the president of global consumer brands at S.C. Johnson & Son, who once told us that, “If you start with possibility and work your way back to the current circumstances, you always end up with something bigger than if you start with the circumstances and try to figure out what is possible.”

Just look at IBM. The tech giant left the personal computer business years ago to invest in innovation. It is now at the forefront of game-changing artificial intelligence that is proving to be a literal lifesaver. After big promises and intense scrutiny from the health care industry, IBM Watson, the division that develops cognitive computing technology, is finally seeing real results. IBM AI’s products are now able to identify patients most at risk of relapsing into opioid abuse, pair cancer patients with clinical trials, and improve doctors’ ability to accurately diagnose cancer.

But this kind of innovation did not take place overnight—and it did not come without big costs and challenges. IBM Watson has total annual payroll costs north of $10 billion. In 2017, the division ended a once-heralded relationship with the University of Texas’ MD Anderson Cancer Center. Even with $62 million in funding, IBM had failed to deliver a cognitive computing system that could meet the center’s goals. But IBM’s more mature and stable divisions help to balance the risk by providing security so IBM can continue to innovate. 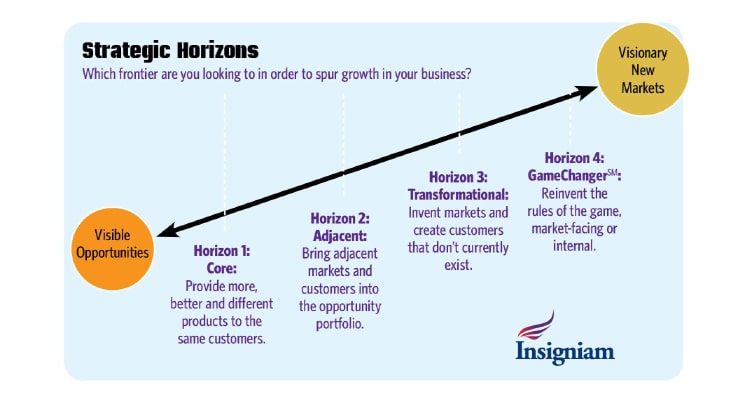 Other major companies are in the middle of attempting similarly groundbreaking advances. In 2012, Lego A/S pledged to replace its iconic plastic blocks with a plant-based substitute (think corn, wheat or sugar cane), pouring $150 million of R&D into some 200 combinations of materials. A viable plastic replacement could spark a transformation in manufacturing far beyond the toy industry. But seven years later, the company has still not created a solution. Failure is a real risk when venturing into new frontiers. Leaders who enter unfamiliar territory must be willing to attempt moonshots and own the consequences if the rocket explodes on the launchpad.

Bold leaders who aim for Horizon 4 are never fixated on profit alone. Doing so runs the risk of turning big ambitions into middling results. A GameChanging idea always begins with the critical question: How does this solve a problem and provide value?

When Stanford University students Larry Page and Sergey Brin received an initial angel investment of $100,000 in 1998, they wanted to turn their program that linked academic citations into a search engine that could apply the same back-linking algorithm to the entire internet. It was an inspired thought—one that was not obvious from their initial graduate work. So they built an algorithm, an infrastructure and eventually an organization. Two decades later, Google produced $136.2 billion in revenue.

GameChangers can appear in any industry, at any size organization, at any moment. Yet the larger and more experienced a company becomes, the less tolerant its leaders are of the risks of failure. Ossified ideas, comfortable assumptions and the pressure of board members, shareholders and the public pushes leaders toward the status quo. This listless drift is a natural law in business; while it keeps people in comfort zones, it is always ultimately degenerative. The best leaders understand that bold vision and real ambition are the fuel that drives companies forward. This is why embracing failure is particularly critical when chasing Horizon 3 or 4.

Most organizations have sacred cows: unexamined assumpti ons and beliefs that are usually not spoken about and live in the background of a conversation.

That kind of fearlessness is exemplified by the Apple Newton, a personal digital assistant launched in 1993 that was decades ahead of its time. With its ability to transcribe handwriting to text, store contacts, manage calendars and send faxes, the Newton invented the category of the personal digital assistant. But like many original innovations, the product was widely ridiculed by the press as an extravagance. The criticism shook Apple’s nervous leadership, and in 1998, one year after Steve Jobs returned to the helm of the company, he killed the product.

Yet in its relatively short life, the Newton introduced the world to the game-changing idea that the computer and all of its functionality could fit within a person’s hand. Its technological advances would be influential as well, giving rise to the ARM processor that today powers billions of smartphones.

John Sculley, who developed and launched the Newton as Apple’s CEO, was not afraid to make a bold move. He believed great innovators must possess a sense of urgency when striving to create new ideas and then soberly evaluate the results. In many ways, any GameChanger must be as willing to sprint toward an idea as they are to backtrack and find a new path entirely.

While the Newton was a flop, Apple’s launch of the iPod and iTunes in 2003 was a GameChanging success. It created a new paradigm, opening a new market and new customers, and generated vast new revenue streams in the process.

At Insigniam, we often say that the only way to survive the future is to create it. Creating the future requires a monumental change in the way you think. You must recognize and fight back against drift, the momentum that pulls strategy and performance in the same direction it has always gone. Doing so takes courage, because unhooking from the past introduces uncertainty. Reinvention means committing to a completely different and unknown way of life.

But committing to transform your reality, even when you do not feel ready, is a powerful step. It is also a necessary one—because, as strategy and innovation expert Rosabeth Moss Kanter points out: “It’s never totally clear when you have to decide that you need to change. When it is totally clear, it’s often too late.” Click To Tweet

That is why pushing off from the security of shore toward the unknown of Horizon 4 is, in fact, the safest action you can take. The unknown may be daunting—but it is far less scary than staying put. 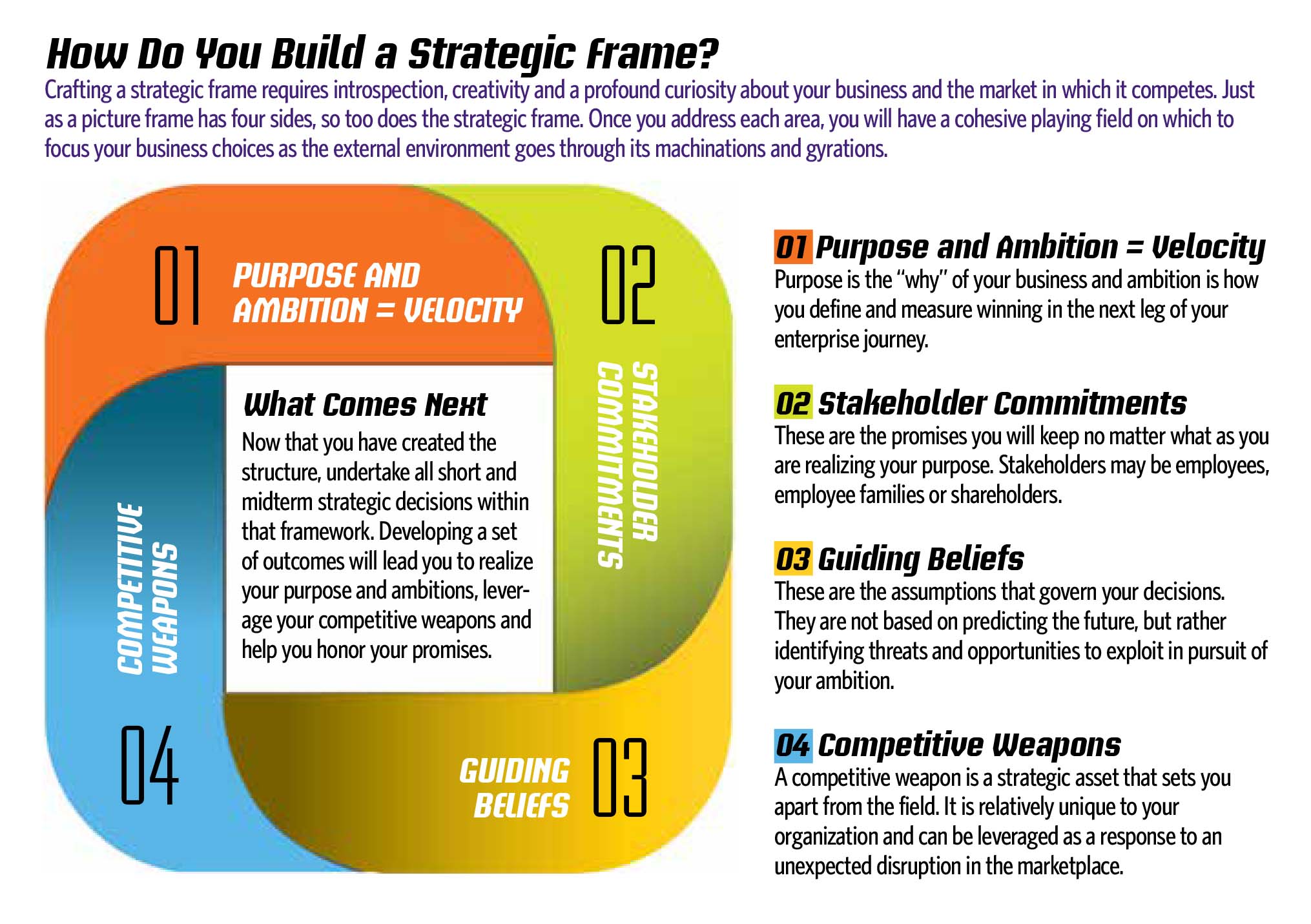