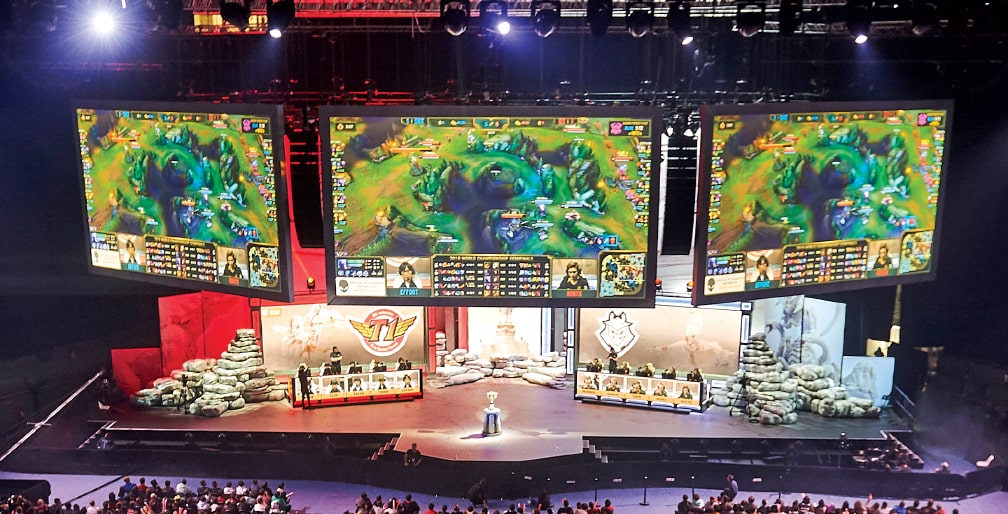 Twitch might be the largest social network you have never seen. Its viewership is larger than that of ESPN or Fox News. [bctt tweet=”Some 15 million daily active users spend an average of 95 minutes per day watching people play video games.” username=”insigniam”]

Research firm Newzoo expects global esports revenues to reach $1.1 billion in 2019 and $1.8 billion by 2022. Like some other professional sports, brand sponsorship makes up the vast majority of that revenue, enabling hundreds of gamers to train, compete and rake in their winnings—$3 million for first place in the 2019 Fortnite World Cup Finals, for example. While esports revenue figures are a drop in the bucket compared to the estimated $135 billion generated by the entire video game industry in 2018, the impact of esports is being felt in more ways than just dollars. For example, more than 170 colleges and universities have esports programs involving a total of more than 5,000 student athletes.

“For Generation Z, gaming is a platform for expression,” says Glen Calvert, COO at Fnatic, a professional esports organization with teams that compete in over 100 events around the world each year. (Fnatic is one of nine professional esports franchises that Forbes estimates have hit $100 million in value.) “Digital athletes are the new content creators and entertainers. People want to watch people doing what they’re passionate about. The best players are very similar to professional athletes in their dedication and ambition,” Mr. Calvert says.

“The new Michael Jordans and David Beckhams will come from the gaming world.”

As esports heats up, the video gaming industry is changing to meet this new model of participation. In the past, game developers built narrative-based adventure games, mostly intended for single players who might spend hundreds of hours traversing many levels and challenges.

Today, developers are building more games designed to attract viewers as well as multiple players. Game content stresses live participation, teamwork and ranked competition, with storylines that may last no longer than a feature-length movie—if a single player mode exists at all. “If a game takes 24 hours to play, it won’t draw the audience of something that takes two hours,” Mr. Calvert says. Epic Games’ Fortnite, the phenomenally popular free-to-play battle royale game, epitomizes the experience audiences are seeking. “It’s a game that’s designed around competition,” Mr. Calvert says. “It’s easy to follow.” Game developers have found that the key is continually refreshing the game play—introducing new characters, features or story twists every few weeks to keep viewers coming back. Riot Games’ League of Legends, whose competition debuted in 2010, is considered the top esports title. “[It] is constantly developing throughout its life cycle,” Mr. Calvert says. “The characters evolve to keep it fresh.”

That kind of dynamic game experience can eventually reward game-makers with long-term subscription and sponsorship revenue. Subscription-based pricing, which has already remade the music and television industry, is on the rise in the video game sector as well. In 2018, the top three game subscription platforms earned $273 million, according to SuperData Research Holdings. That is a small slice of total industry revenues, but the slice is expected to grow. In-game monetization is another revenue source publishers are looking to; Fortnite generates much of its revenues that way.

“For publishers, finding the right mix of business models in an extremely dynamic market, with pressure from politics and a diverse game enthusiast community, will be the biggest challenge in the coming years,” Newzoo CEO Peter Warman wrote in the company’s 2019 Global Games Market Report.

“Esports provides a new way for the community of a game to engage with the game and with other fans, which can lead to longer retention rates.”

Shifts driven by the rise of esports present both opportunities and challenges to game developers. The industry is highly competitive; many titles never turn a profit. Subscriptions give publishers the ability to refine content and build their audiences organically while decreasing their reliance on “big bang” sales immediately following a new release. SuperData Research also notes that subscribers spend twice as much on in-game content as unsubscribed players.

The challenge is that game developers must court a large, global audience of players and viewers to succeed. This is where publishers like Sony, Microsoft and Tencent step in. These companies have become major sponsors of esports competitions, investing millions in prize money and promotion. They are also spending to broaden their sponsorship and marketing programs to reach the new breed of Twitch stars, some of whom already have millions of followers.

The marketing power of these esports athletes cannot be overlooked. Fnatic “has a team dedicated to finding influencers of interest,” Mr. Calvert said. Esports “entertainers” (as he calls them) may be put on retainers with performance bonuses tied to engagement, the size of their fan bases and viewership of their video streams. A publisher that can establish a title as a competitive esport can hit the jackpot; esports are a “business development function for your game,” Mr. Calvert explains.

Looking to the future, Remer Rietkerk, head of Newzoo’s esports practice, thinks it is hard to see a downside for game publishers. “Esports provides a new way for the community of a game to engage with the game and with other fans, which can lead to longer retention rates,” he says.

For those under the age of 25, who have never known life without the internet, engaging with on-screen characters is as natural as tossing a football. Mr. Calvert says esports will loom larger and larger on the cultural landscape: “The new Michael Jordans and David Beckhams will come from the gaming world.” IQ

Every day some 15 million viewers tune into esports, testifying to the power—and profitability—of customer-centricity. Spotting a sea change in the media landscape driven by digital natives, many game developers transformed their organizational strategies. Turning from single-player adventure games, they began crafting full-on experiences for players and fans. Sometimes it pays to let your next generation of customers guide you into the future

This article appeared in the Winter 2020 issue of Insigniam Quarterly, with the headline “Esports: The Wide World of Esports.” To begin receiving IQ, go here.