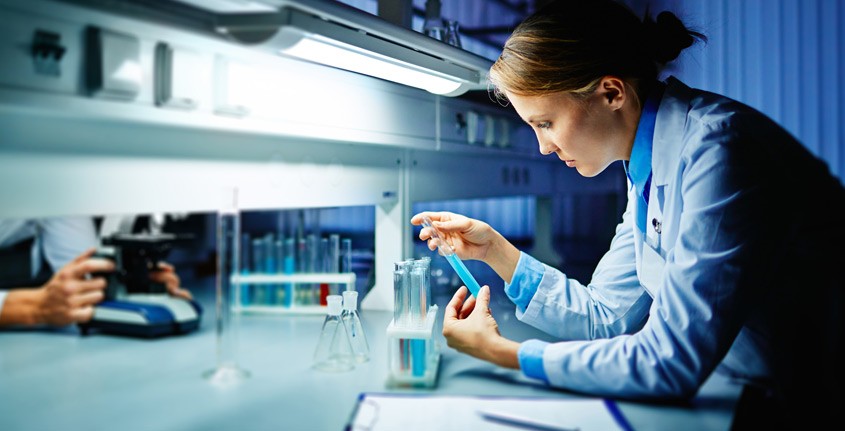 How to Boost Your RQ

The U.S. economy has a stagnation problem: For more than a decade, GDP growth rates have been lackluster. In response, it has become trendy to argue that the country similarly has a serious—perhaps terminal—innovation problem.

Consider this: R&D labor—basically, the number of people performing R&D roles—has increased 250 percent since 1971. But U.S. GDP growth has slowed over the same period, and productivity growth has almost flatlined. As PayPal co-founder and venture capitalist Peter Thiel has said, the country is “running harder and harder and faster and faster to stay in the same place” today. Prominent economists have suggested that modern America has simply exhausted its supply of obvious, powerful innovations.

Anne Marie Knott, aRobert and Barbara Frick Professor in Business at Washington University’s Olin Business School in St. Louis, disagrees. That does not mean she thinks innovation is going gangbusters. In fact, according to her own research, U.S. companies’ average research quotient (RQ)—a metric she created to measure the economic benefits specifically attributable to R&D—has plummeted 65 percent over the past 30 years. But instead of believing that innovation is getting harder, Ms. Knott argues that businesses have merely done a crummy job. She is an optimist because she believes the innovation problem is inherently fixable: If U.S. companies improve their RQ, they will prosper and growth will return to the high rates enjoyed in the mid-20th century.

“Companies that are monopolists or near-monopolists ultimately stop innovating and stop growing.”

RQ is empowering, Ms. Knott says, because it provides companies with a quantifiable way to measure the value of R&D. Sure, Henry Ford, Thomas Edison and Steve Jobs did not need metrics to tell them how to place their innovation bets. But for nonvisionaries, RQ—specifically, the percentage increase in revenue that results from a 1 percent increase in R&D spending—is a concrete figure that helps guide them down the right path.

“I argue that everyone has been flying blind,” Ms. Knott says. “Historically, there has been no good way to measure the quality or productivity of R&D.” The problem can probably be traced to the rise of financial management during the 1980s, “which put forth the idea that anyone can manage anything by looking at the numbers.”

But placing the right R&D bets is never that simple. In order to determine which decisions and philosophies create high RQ, Ms. Knott studied four decades of data for all publicly traded U.S. companies. She found that a handful of corporate habits spark massive innovation, but many have fallen by the wayside.

Embrace competition. Historical data show that competition is good for R&D because it prevents what Ms. Knott describes as the “monopoly innovation trap.” “Companies that are monopolists or near-monopolists ultimately stop innovating and stop growing,” she says. The number of companies in an industry increases not just the amount of R&D investment, but also the RQ—the return on R&D investment. This is intuitive: Performance tends to improve when people must engage in a “survival of the fittest” struggle.

There is, however, a way for companies already in a monopoly to enjoy the fruits of their position without sacrificing RQ. Ms. Knott says these companies, usually run by the original founder, can innovate ahead of the competition in order to prevent potential rivals from entering the industry. She points to Dolby Laboratories, a maker of audio/visual signal processing technology. Founded in the United Kingdom in 1965 by Ray Dolby, the company has enjoyed high RQ because it refuses to rest on its existing patent laurels and has innovated at a rate that discourages others. (Google and Amazon, which likewise have founders at their helms, are also good examples, Ms. Knott says.) Dolby invests only in technology that can be patented, which requires the organization to move faster than the time frame in which the patents expire. It also licenses its technology to consumer product manufacturers at incredibly low royalty rates, so these companies have no incentive to design around Dolby’s technology.

Centralize. Several decades ago, most companies ran their R&D out of centralized laboratories. In the past 30 years, however, many big corporations have moved their R&D decisions to business units, believing they are closer to the market and therefore will make more commercially relevant decisions with short-term results and little risk.

Procter & Gamble began decentralizing its R&D in 2000 in an effort to raise profitability and decrease time to market. Before decentralizing R&D, the company was known for creating entirely new product categories: Febreze fabric refresher and odor removal spray (1998) and Swiffer Sweeper (1999). But when the behemoth changed its structure and put business-unit heads in charge of developing new items, RQ declined because research was suddenly tied to immediate profit concerns, Ms. Knott explains. Focus turned to small, parochial innovations. “P&G doubled its number of innovations, but revenue per innovation fell by half,” she says.

Overall, according to Ms. Knott, companies that centralize their R&D have 38 percent higher RQs than their decentralized peers. Centralized R&D creates long-term research opportunities that span an entire large company, while decentralized R&D practices will remain short-term oriented and siloed.

Do not outsource. Much like the gospel of decentralization, corporate leaders have also widely accepted the notion that open innovation—doling out R&D to external companies—improves financial performance. There has been a 2,050 percent increase in the amount of R&D outsourcing to third-party companies, Ms. Knott says, even though doing so incurs innovation costs without increasing revenues. She also argues that paying someone else to innovate for you decreases a company’s innovative capability.

“The RQ of outsourced R&D is zero,” she says. “It might be shocking, but it’s true.” Why is outside R&D so unproductive? Ms. Knott puts forward a few possibilities: Companies automatically outsource their worst ideas, because they are easier to kill when they exist outside the company. Resources at the vendor may be inferior. And it costs less to outsource—but you get what you pay for.

Aim for the space between incremental and radical. Thinking too small is an RQ killer, but swinging too hard can also be trouble. Click To Tweet Call it the innovation dilemma: Although breakthroughs like electricity, personal computers and smartphones power the economy and change lives, historical data show they often don’t benefit the companies that initially create them. 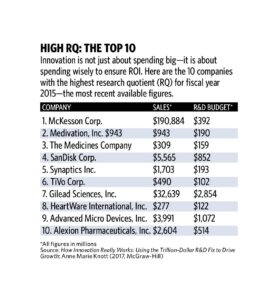 “The returns on radical innovation are lower than those for incremental innovation,” Ms. Knott says. This is largely because the market for a truly radical innovation does not yet exist, and the company that creates the idea often loses out to later competitors who improve on the creator’s design. (History offers up many painful examples: Netscape commercialized the internet browser but lost out to Microsoft’s Internet Explorer; Sony launched the first advanced commercial e-reader but was usurped by Amazon’s Kindle; the IBM Simon, considered the first smartphone, was a dud when released in 1994, but Apple struck gold with the iPhone more than a decade later.)

There are ways to get around the radical-innovation conundrum. Ms. Knott points to Motorola, which was able to successfully transition from making televisions into the then-radical realm of cellular phones. The company avoided typical pitfalls by exploiting its previously developed resources in the TV business—large-scale manufacturing ability and a sterling brand image. The Medicines Company, which Ms. Knott lists as one of her favorite high-RQ corporations, avoids the steep costs of radical innovation in a different way: by recycling other bold innovators’ failures. The company, based in Parsippany, New Jersey, buys other pharmaceutical companies’ failed patents at a steep discount and then designs better clinical trials that improve the odds of FDA approval.

Given all these examples of failure and misconceptions, it can be daunting to determine the right way to allocate an R&D budget. Ms. Knott counsels that relief can be found in the numbers. She suggests every company determine its own RQ, benchmark it against competitors and a company’s own history, and then dig into the divisions or historical periods that had the highest RQs. “I compare it to stepping on the scale every day,” she says. “Companies need to constantly manage their RQ.”