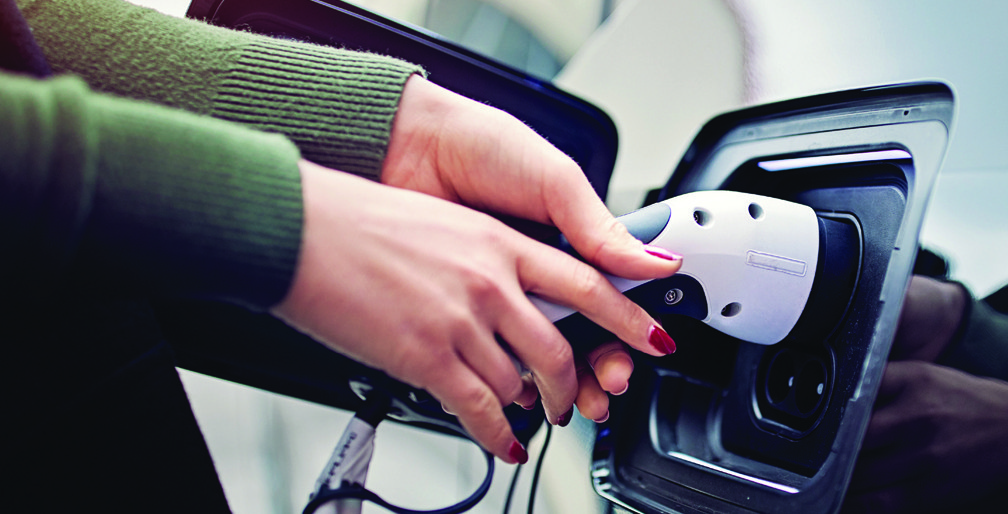 Coming late to the party isn’t such a bad thing if you arrive in an electric vehicle. Being a startup in the world of automakers may make it easier to jump on the EV bandwagon. Legacy companies must retrofit plants (General Motors and Ford), redesign popular models (Ferrari, Toyota, Volkswagen, Kia, Mazda, Subaru), and/or completely reinvent their platform to be all-electric ASAP (Jaguar, Volvo, Mercedes-Benz, Audi, Lamborghini).

Startups, on the other hand, have been growing up alongside the climate awareness that was accelerated by the pandemic. As such, these companies aren’t reinventing the wheel so much as pairing it with the latest eco-friendly technology. They can focus on the try-fail-move-forward-faster approach that drives innovation. Cases in point: Canoo, Fisker, Foxconn, Lucid and Rivian are either planning to build, already building or adding to their fairly new plants.

Amped Up: Legacy auto makers must retrofit plants and redesign popular models to be all-electric ASAP.

Furthermore, recent comers have no C-suite heartstrings (or purse strings) invested in petroleum-fueled products: Their “baby” has always been electric, so no need to “sell” shareholders or one another on making a change. Plus, their reasonable IPO prices are attracting savvy investors. Tesla stock has been dubbed overvalued, and lists of “cheap” EV stocks are being offered. For now, the more established all-EV makers are leading the way in sales over mature brands: Of the top 10 bestselling electric vehicles for the first seven months of 2021, four are made by Tesla.

Is all of this to say that startups have the advantage over legacies? Not by a long shot. As in any type of evolution, those who adapt will win the day and, as it turns out, maybe even save the whole darn planet. 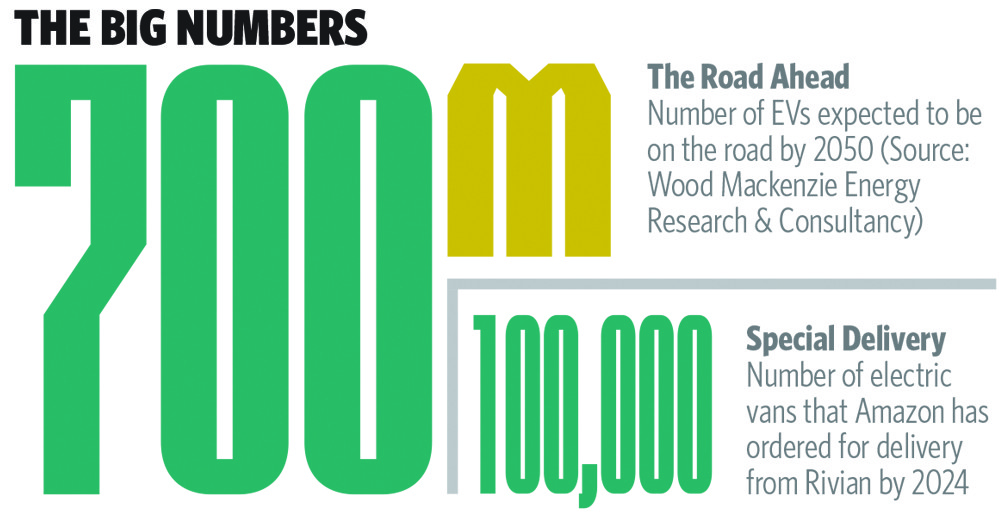 Well-established companies have many things startups lack, including industry relationships, ample capital and huge R&D teams. Many carmakers are following the lead of Big Pharma, which partnered with frenemies in 2020 in pursuit of vaccines and therapeutics to fight the pandemic. Joining corporate forces against a global catastrophe is not only good business, it’s great PR. A Harris Poll showed that more people had a favorable opinion of drugmakers (62%, up from 32%) after their COVID-19 collaborations.

Earlier this year, Japan’s Honda—the world’s largest engine maker—announced a partnership with GM to build Honda EV crossovers (including one under Honda’s upscale Acura badge), with GM supplying its Ultium battery platform. Honda also shifted its former head of R&D, Toshihiro Mibe, into the role of CEO to accelerate the revolution. Other new dance partners include German Volkswagen AG and Ford, and the French PSA Group (aka Peugeot S.A.) and Italy’s Fiat Chrysler, which are now called Stellantis.

Representatives of Ford, GM and Stellantis—half of each of the three pairs—were literally standing behind President Biden in August as he stated the goal of having EVs compose at least 50% of U.S. car sales by 2030.

The world is rushing to install the charging stations needed to spark real consumer change. Meanwhile, GM is using gas-guzzler sales to fuel innovation. “When you look at our internal combustion business, we are…in a place where we can be investing more in electric and autonomous vehicles,” GM’s Mary T. Barra, the industry’s first female CEO, told The New York Times. “We think we can grow as we make this transition.” 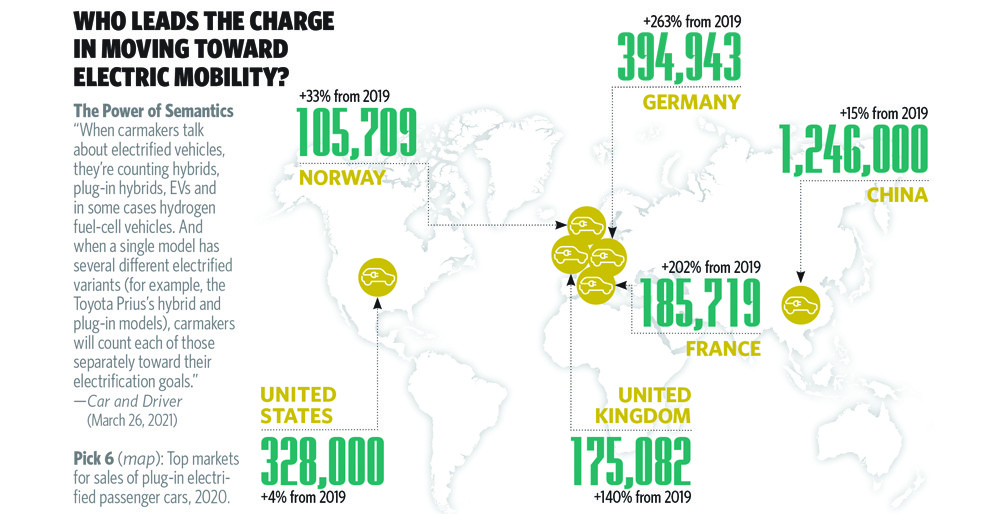 Tesla is taking a different route, offering free installation and maintenance of its Superchargers on commercial property as a lure for well-heeled consumers and a means of sparking proprietary plug-in sites.

Still, as scientists have long said, the time is now. As of July 2021, China was cornering the global supply chain for electric vehicles and their batteries, and the European Commission had announced an outright ban of the internal combustion engine by 2035. Automakers had best put the pedal to the metal if they hope to stay in the race. 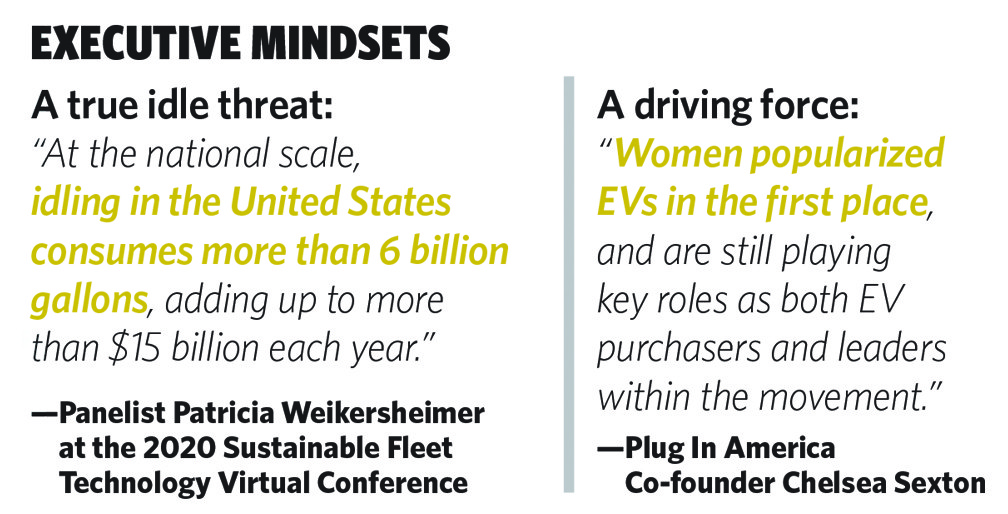