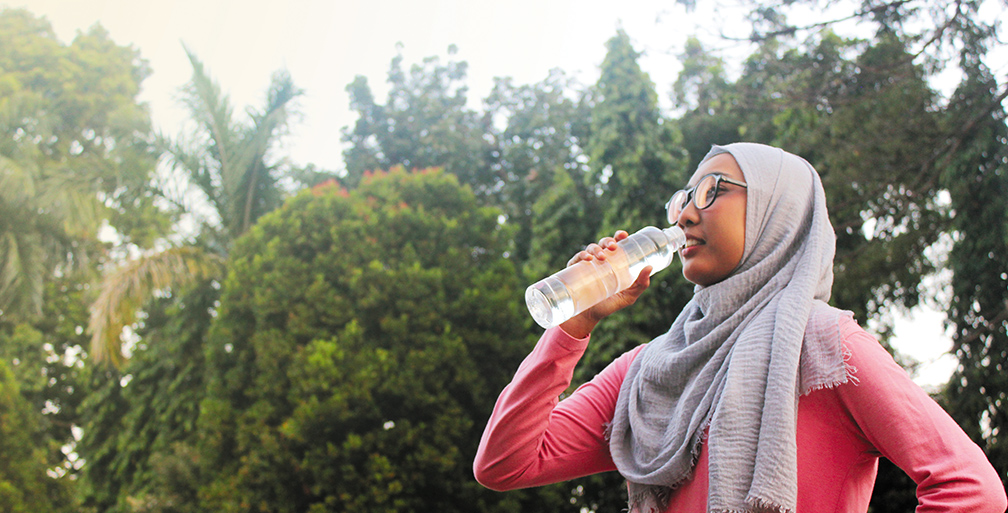 A Thirst for Doing Good

Indonesia is known for its tropical forests, beaches and thousands of islands. The world’s largest archipelago is also  the fourth-most-populous nation, with 274 million people. Yet 28 million Indonesians lack safe water. So Danone AQUA’s presence and influence in Jakarta, Indonesia’s capital and largest city, is significant.

Its mission to bring healthy beverages and safe drinking water to people throughout the world was first conceived in 1973 to meet the needs of every family in Indonesia. It also recognized early on the importance of preserving and protecting the nature around it. Danone Waters Indonesia and SEA is the nation’s largest bottled mineral water and beverages company. Its parent company, Danone, produces healthy nutritional products and waters for more than 120 countries, including the U.S. The interconnection between people and planet is recognized throughout the company, and is reflected in Danone’s tagline: “One Planet. One Health.”

Driven to Do Good

The mission to do good and its focus on sustainability drives Danone’s business strategies, practices and operations. It’s also a mission that strongly resonates with Danone AQUA’s first female president director, Corine Tap. Named Best Green CEO by Warta Ekonomi (an economic news portal based in Jakarta) in 2017, Ms. Tap continues the tradition of promoting health—both human and environmental.

“I’m not only supporting the wealth of our shareholders but I’m also supporting an improvement in wealth and well-being of people, as well as the planet,” she says. “That’s a guiding star for me.”

In 2018, Danone North America became the largest Certified B Corporation, a process that took about a year. Danone is the global leader in four businesses: dairy and plant-based products, early life nutrition, medical nutrition and waters. The company has 100,000 employees in 55 countries. Last year, Danone saw €25.3 billion in sales, a growth of 2.6%.B Corporations balance purpose and profit and are legally required to consider the impact of their decisions on their workers, customers, suppliers, community and environment. This certification is a reflection of Danone’s longtime commitment to sustainable business practices.

Twenty-eight of its entities, including Danone AQUA, have earned B Corp status, which means that more than 45% of the company’s sales are covered by B Corp certification. Ms. Tap says that Danone AQUA’s purpose of doing better for communities and the planet was entrenched from the beginning.

“It’s part of our DNA,” she says. “Our mission is to improve the health of all Indonesians through healthy hydration, with the best-quality water containing the best minerals filtered by nature. We can only do that sustainably and long-term if we look after nature well.”

The company has integrated sustainable farming practices around its 22 water sites in Indonesia, and trees have been planted to manage the surrounding food ecosystem. Another business innovation that combines sustainability and social responsibility is helping to address Indonesia’s enormous waste management challenges—its more than 10,000 islands posing a special challenge. In 2010, Danone AQUA established an infrastructure with waste pickers, giving them access to becoming a part of the formal economy by offering health care for them and their families in exchange for collecting plastic bottles. (Nearly 14% of Indonesians—many of whom are self-employed, like waste pickers—lack access to health insurance.)

The initiative has increased the number of bottles that can be recycled and made into new ones. It is a measure toward the company’s 2025 goal to collect more than it produces with packaging that is 100% circular, which means that it is either returnable, reusable, compostable or recyclable. The socially inclusive measure also benefits waste pickers. Although they contribute to public health, safety and sustainability, they often face low social status, deplorable living and working conditions, and little support from local governments.

“We believe that goodness is part of who we are,” Ms. Tap says. “Therefore, it’s integrating everything we do.”

She hopes Danone inspires more companies to become Certified B Corporations. (See accompanying story, “B Corps: Doing Well & Doing Good.”) Ms. Tap says she is often asked about the business case for sustainability and doing good. “It is our true belief, my true conviction, that it’s the role of companies. There is only one planet, as far as we know, that we can live on, and we have only one life. So how do you make sure that we use our resources and our capabilities to the max to do well, not only for now but for future generations and the future of this planet? [bctt tweet=”The health of people and the planet are connected. It’s our role to work to support that.” username=”insigniam”]” “I’m not only supporting the wealth of our shareholders but I’m also supporting an improvement in wealth and well-being of people, as well as the planet.” —Corine Tap, senior vice president, Danone Waters Indonesia and SEA

Danone AQUA’s philanthropic response during the COVID-19 pandemic has included financial contributions of at least 30 billion Indonesian rupiahs in the form of medical equipment, water and nutritional products. In addition, the company has contributed personal protective equipment (PPE), ventilators and other essential medical gear.

“The pandemic has also sparked new ways of doing business,” says Ms. Tap. “We have been able to adapt our campaigns, our communications and our interaction with consumers and the different stakeholders as such that we could also support the government in fighting COVID,” she says.

They modified their advertising campaigns, finding creative ways to amplify the government’s message to stay home. For example, the brand replaced an existing billboard with a simple but powerful message: “For the first time ever, we do not want you to see this ad. Stay home. Stay hydrated.” Danone AQUA has also provided online video tributes to medical practitioners, and there is an emphasis on recognizing the company’s essential workers, who were continuing to supply products.

Ms. Tap says their commitment to sustainability has never wavered. As more people stayed home, they launched the AQUA XGrab program in which drivers not only deliver food to homes but also collect recyclables. Since waste pickers are so crucial to the country’s waste management system, Danone AQUA also donated food and PPE so that they could continue working safely.

“We’ve learned to collaborate virtually—across countries and within Indonesia—in a way that we never thought possible,” she says. Because many workers endure long commutes, Ms. Tap says working from home has led to more efficiencies as well as more time with families. She predicts a possible hybrid work option in which employees can meet and collaborate face to face at the office, as well as do their jobs remotely.

The pandemic has prompted her to lead differently, too. Ms. Tap spends a lot of time checking in with her staff. She reminds them to take breaks while working from home and asks about their mental well-being. “I see that as a really important task as a leader, not only to be a role model but also to encourage,” she says. “It’s really exciting to have accelerated these new ways of working that find a better balance between efficiency and effectiveness and between work and home—and to make that more integrated and more sustainable long-term.”

Preparing for the Future

The abrupt need to radically change people’s behavior, how they live and work, was unforeseen, Ms. Tap says. How does that shape Danone AQUA’s future?

“It’s important to use this experience as a guide for the future,” she says. Her company will explore other
possible unpredictable scenarios that may necessitate significant transformation. “We want to ensure that as an organization we are always prepared to adapt ourselves to a changed reality. We know there will be silver linings and new opportunities.”

Ms. Tap adds that their commitment to sustainability will remain a key focus, regardless of what 2021 brings. If anything, she says, the pandemic furthers the need for it. “I think we should even accelerate our commitment to One Planet. One Health.” The company will continue to work toward being 100% circular by 2050 in the areas of water, packaging and energy (carbon). She says it’s easy to allow such goals to become secondary in challenging times, but it’s crucial to stay focused. “Adapt to the current situation, don’t let go. See how you can even accelerate in some areas. Some parts you may have to pause, but to continue to actively implement and drive these road maps is the only way you reach your goals. It’s also how you will make a big difference and inspire other businesses and companies to do the same.” In 2006, three friends—Bart Houlahan, Jay Coen Gilbert and Andrew Kassoy—left their careers in private equity to create B Lab, a nonprofit dedicated to making it easier for mission-driven companies to improve their positive impact over time. B Lab is the certifying agency for B Corps—companies that meet the highest standards of verified social and environmental performance, public transparency and legal accountability.

More than 3,500 companies in 74 countries have been certified. B Corps businesses are legally required to consider the impact of their decisions on their workers, customers, suppliers, community and the environment. According to the Global Impact Investing Network, B Corps demonstrated a greater revenue growth rate than public firms of comparable size from 2006 to 2011, a period that includes the Great Recession.