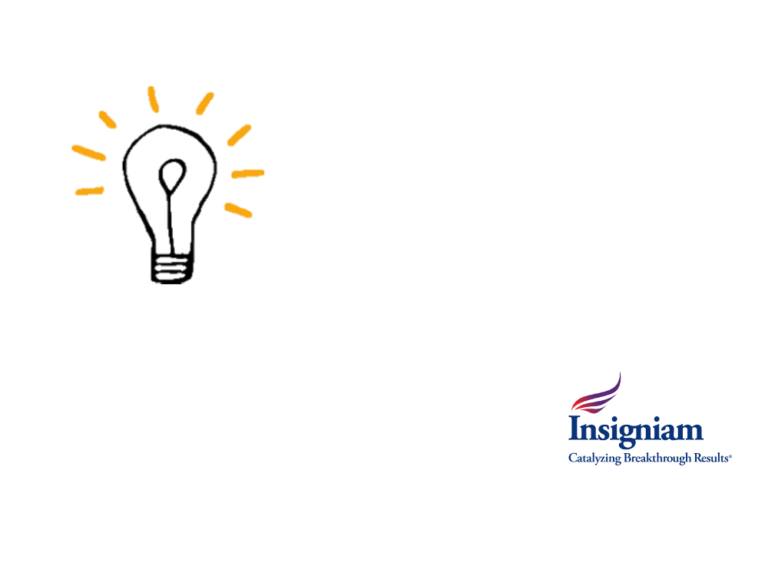 Here’s How to Overcome Barriers to Innovation

By InsigniamJanuary 21, 2021December 23rd, 2021No Comments
By Insigniam minute read

This article originally appeared in the Summer 2016 Gaming & Leisure Magazine.

On the surface, embedding innovation within an organization appears to be a relatively straightforward process: Hire some creative people, give them an office and budget, and prepare for breakthroughs. Unfortunately, as the saying goes, if it were that easy, everyone would be doing it.

Integrating an significant, new way of thinking and working into an organization is a complex process of addressing reporting relationship, accountabilities, turf battles, salary disputes, and office locations. Integrating innovation is even more complex in that successfully embedding innovation into people’s everyday ways of working requires fundamental contradictions to the already-always nature and make-u of enterprises. Institutionalizing innovation is not about implementation; it is about transformation.
Ideas Are Not Enough

Leading innovation means creating a context in which idea emerge from all corner and are potently monetized to create new value for customers and the organization. WE worked with a subsidiary of a Fortune 100 company that had successfully grown to dominant market share worldwide but stagnated with little room for further growth. The executive team set an ambitious goal for innovation: $150 million in revenue from new products that did not yet exist within 5 years. Six months later, they had generated many great ideas—but had made zero progress on execution.
Barriers to Innovation Execution

What happened? Great ideas, even great prototypes, are not enough for profitable innovation in large companies. Kodak famously invented and saw no value in the digital photography. Xerox invented and saw no value in the GUI, Ethernet, or Laser Printer. Control Data saw the PC revolution as a passing hobby. Procter & Gamble acquired the technology for its billion-dollar Swiffer from another company. Bill Gates bought DOS from Seattle Computer Products for $50,000.

How a new innovation occurs to people within a company corresponds to the actions that they do and do not take It is easy to wonder how Microsoft missed mobile, how Blockbuster could not anticipate Redbox and Netflix, or why VRBO or Marriot didn’t create Airbnb? Closer to home, why didn’t Bally, William Hill or Caesars create Poker Stars of DraftKings?

Over our 30 years working with executives in large, complex organization, we have identified three forces that inhibit innovation in these types of corporations:
Three Forces that Inhibit Innovation

• Corporate Gravity: like a force field that keeps people from venturing too far beyond the core business model, pulling for the predictability of what is, rather than what could be.
• Corporate Myopia: shortsightedness in which today’s business model supersedes the importance of future business opportunities.
• Corporate Immune System: organizational antibodies that thwart any deviation from what already is.

An Ecosystem for Innovation Execution

The leadership enrolled corporate and their own people in the new context for the company in a powerful way that touched, moved, and inspired people to take extraordinary action. Within six months, the subsidiary launched three new business units targeting three adjacent market segments. One of the three businesses fueled double-digit growth for the subsidiary for the next decade. Five years after the launch, the subsidiary had blown past its ambitious $150 million target with new products accounting for $500 million in annual revenue. Within a decade, revenue from the new business surpassed $1 billion.
Implement The Four Pillars of Enterprise Innovation

Good management creates predictability and eliminates variation. Good leadership accomplishes results outside of what is predictable and beyond business-as-usual. Both are required for innovation that continuously produces new streams of profitable revenue.

In their book Strategy Innovation, my colleagues Robert Johnston and Douglas Bate distinguish the four pillars necessary for innovation in large, complex organization:

The senior leadership commitment to innovation, which could include tangible structure changes, clear accountability for those involved , and an impassioned appeal.

The establishment of an infrastructure specifically for innovation so that it has a home, resources with which to operate, and metrics to asses its performance.

The establishment of rules, norms, and recognition in support of innovation will ultimately create a culture that is supportive of innovation.

The development of a specific process for identifying and evaluating new business opportunities, e.g., the Discovery Process, unique to the company’s business and culture.

Each pillar is intended to simultaneously stand on its own and be correlated to and supported by the other three pillars. As a whole, the four pillars provide a pathway for where to take potent action to create a culture of innovation within a company. Together, the pillars protect against and inoculate the organization from the three forces that inhibit innovation They form the condition for an ecosystem in which innovation can be effectively managed to sustainably produce new profit streams.

Let’s dive deeper on one of the pillars: Supportive Corporate Culture.

“Whatever is reinforced and rewarded within a corporation”

Corporate culture could be thought of as the set of unarticulated rules for success inside the enterprise. If you think about it from a particular view, an organization’s current culture, processes, structures, and systems are artifacts of past successes and failures. To be successful in embedding innovation, the culture processes, structures, and systems need to be redesigned so that they pull for success in the future.

While many know theoretically that Peter Drucker was right when he said “culture eats strategy for breakfast,” few give as much thought to designing and changing their culture as they do their strategy. When customer preferences change and the market shifts, the first step often is to reevaluate the strategy not corporate culture. Culture seems like something amorphous and difficult to change. In fact, it is possible to transform corporate culture: to end one culture and create an entirely new culture that serves as a competitive advantage.
Culture: Past Successes Can Inhibit Future Success

When the competitive market changes faster than the organization, the old culture impedes success in the marketplace. Internally, however, the existent patterns of perceptions and corresponding patterns of action are validated and reinforced, and the old culture persists. What were proven processes, are improved. What were effective systems are refined and rebuilt. What were solid structures are re-balanced. All the while, corporate performance stagnates or then deteriorates.

“What do successful companies fail?” That was the question that inspired Clayton Christensen’s dissertation research—research that would eventually lead him to the theory of disruptive innovation. As an entrepreneur and consultant, Christensen had observed that many of the best performing companies were a few years later among the worse performing, often with the same CEO and executive team.

Lipstick on the Old Culture

Unless the existing culture is revealed, accepted, and owned, any attempt at culture change will comply be lipstick on the old culture. The supposedly new culture will unwittingly inherit aspects of the old one that can undermine the effectiveness of the change effort.
Culture Transformation for Competitive Advantage

Once management has identified the existing culture, executives must then be willing to relate to it as merely the current paradigm for doing business in the company—”a way of working” rather than “the way the business works”—and then take responsibility for how they, and everyone else in the organization, participate in and reinforce that same culture. Only then is it possible to begin to design a corporate culture from the future to which senior management is committed, a culture that can be a source of competitive advantage, as opposed to being an attempt to fix, change, or improve on the past.

In a designed culture, people naturally innovate to fulfill the vision. In other words a designed culture pulls for the realization of the vision, strategy and intended results. This gives access to the extraordinary accomplishments and to producing measurable results that are beyond the predictable.

Where do you start? At a high level:

A healthcare EVP recently told me about designing their culture, which they say is the reason that they have gone from an average to one of the top 10% health systems nationally over the last six years.

“We had a subgroup work on those values and bring them back to the leadership coalition. Time Rice then our CEO, was part of one of those subgroups and he espoused a certain set of values that stood up and was very strongly articulating why he believed the certain set of values that his group has come up with should be the values for our organization. One brave leader stood up and said, ‘I think those are totally boring and do not reflect who we aspire to as an organization.’ And that was transformational for us as a n organization: that na individual three levels below the CEO in a group of senior executives, physicians, and line staff could say, ‘Time, that’s not going to work for who we aspire to be and for the future of our organization.

We held our collective breaths, and then he said ‘You know what? You’re right. Let’s talk collectively about what the future of our organization is going to be about.’ And so again because our past had been so bureaucratic and top down—that we could say that, a leader in our organization, could say that our CEO and him be on board with it and accept that kind of pushback, that was a pivotal moment for us in our transformation.”

Assuming that you have the four pillars and are generating ideas, how do you decide which ideas to invest in, whether that is internal or external? When most people think of innovation, they think of products, but research from Bansi Nagji and Geoff Tuff found that only 10% of the bottom-line returns from innovation came from product and service innovation within the core of the business.

Whether the new model works or not is left to be seen, but new gaming resort models in the past have produced remarkable earnings growth: e.g., national data-driven loyalty program for Harrah’s/Caesars, convention mega-resorts for Venetian/Las Vegas Sands, and baccarat-driven super-luxury at Wynn.