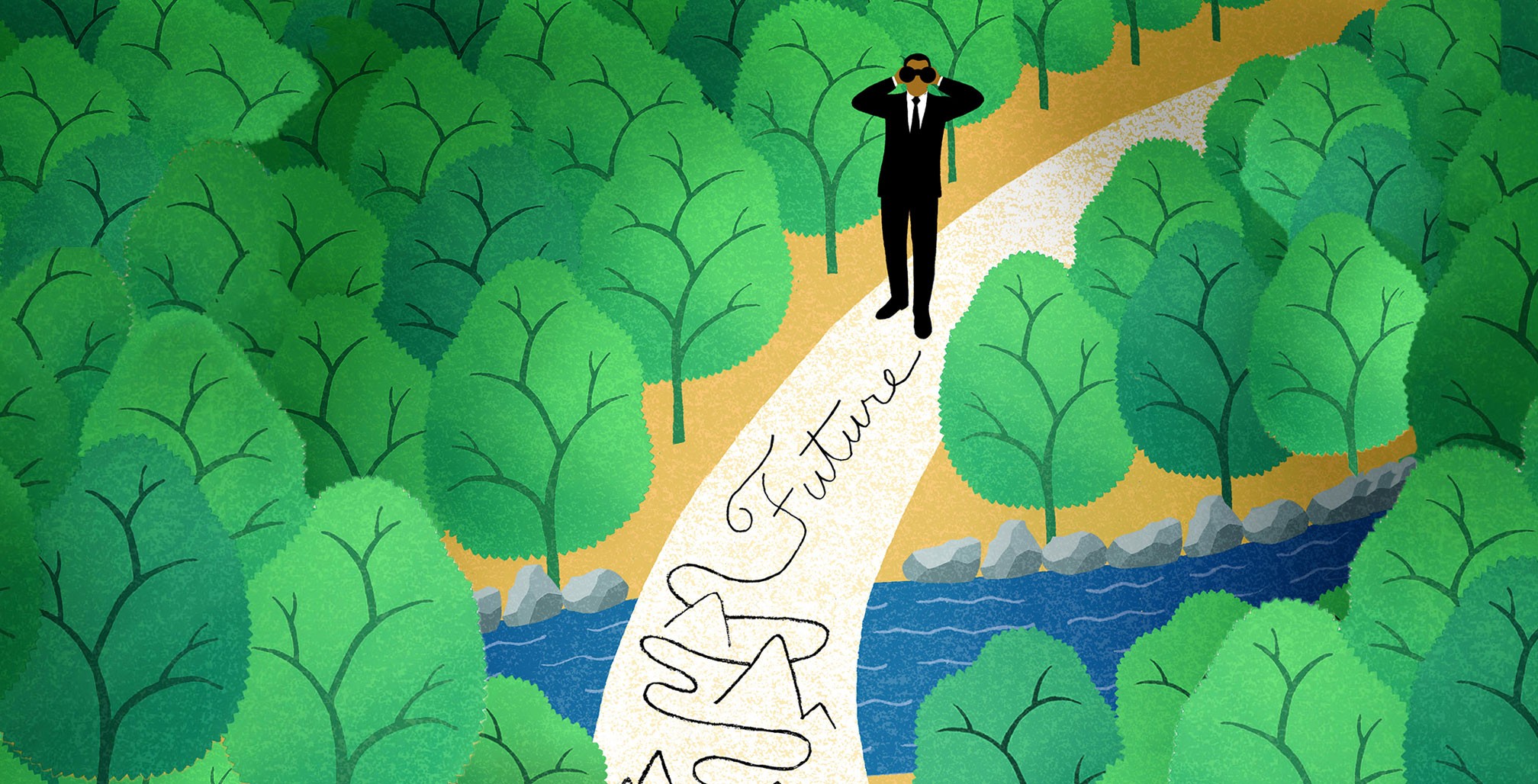 How Executives Create a Winning Future

“The best way to predict your future is to create it,” wrote Peter Drucker, the inventor of modern management. “Trying to predict the future is like trying to drive down a country road at night with no lights while looking out the back window.”

Too many executives see the practice of strategic planning as trying to figure out where the markets are going and how to get there. Instead, the executive’s role is closer to that of a designer or artist or architect—who creates a clear, inspiring, challenging picture of the future in which the people of the enterprise can find themselves and who then leads them to bring that vision into reality.

The past is an island of certainty. The easiest route is to extrapolate from it out into the future, adjusting for present conditions. In an age where CEO turnover is at record levels, it would only be natural to want to cling to a familiar playbook, relying on past rules and patterns to bring order to the swirling chaos confronting us.

Many CEOs, even those from pedigreed business programs, do exactly this. It is the equivalent of driving while looking out the rear windshield. Thanks to a rigid diet of case studies in business school, followed by myopic corporate demands born of quarterly earnings reports, executives learn to solve problems by examining the past and attempting to extrapolate what will happen next. They cling to what Dr. Drucker called “yesterday’s successes” and their knock-ons, rather than looking to a future that will both inspire and challenge the people of the organization. Fixated on prediction, they have not learned how to stare at a blank sheet of paper and create the future.

This is why, for many years, strategic planning meant that executives would determine where the market was headed and what their organization needed to do to get to that place. It was hard to blame them—it worked! In the years after World War II, once Europe and Japan had recovered, there was a whiff of predictability to customers and markets. Computers made it possible to crunch numbers and run scenarios in ways that were impossible before the war. While hindsight has never been a means to breakout success, the prediction-based approach produced solid, predictable results for decades.

But the Great Recession exposed two fatal mistakes that leaders often make: The first is a presumption that a few points of data or years of trends are reliable indicators of the future; the second is a discounting of an enterprise’s ability to impact and shape the marketplace. These are the problems of driving while looking through the rear window.

To thrive in our current volatile business environment, effective executives shift their strategy formulation to a creative process centered on imagining and articulating the future they want.

Storytelling as a Competitive Advantage

From three decades of consulting executives to achieve breakthrough results, we know that companies that can create a proprietary future possess a critical competitive advantage. A proprietary future is a future designed to breathe life into the organization by inspiring, moving and challenging the people of the organization to new levels of creativity, performance and productivity. To thrive in our current volatile business environment, effective executives shift their strategy formulation to a creative process centered on imagining and articulating the future they want.

Once the future has been designed and given voice, it has to be tested against current reality. If it occurs as a pipe dream, the people of the enterprise will just throw up their hands. If it occurs as business as usual, they will be neither challenged nor inspired. The first test of the proprietary future is the CEO herself: Is she inspired, moved and challenged by the proprietary future?

Relocating your vision from the rear window to the front windshield requires more than just courage; it also takes communication. Executives who want to shift their organization’s orientation to a proprietary future must understand that an aspect of effective leadership is a narrative phenomenon—a good story about the future. The ability to create and communicate a compelling story is a core competency of leadership. Click To Tweet Language matters: The words of a leader are a central part of creating (or destroying) a future for their enterprise.

A CEO who leads looking through the front windshield is, in effect, a novelist, but it is a novel about the future without falling into fantasy or science fiction. Facing a blank page, he plots events and fleshes out the characters most necessary to move the narrative forward. And like many great novels, the story might not be obvious, linear or uniform. He is comfortable making narrative jumps, pairing seemingly incongruous ideas and relying on well-articulated imagery and emotion as inspiration demands. He also knows how to edit ruthlessly, cutting methods that no longer work and abandoning a legacy that no longer fits within the picture of the future that he is painting with words.

Most importantly, great leaders, like great storytellers, must find their own authentic voice. It can take years for a writer to hone their own style and perspective while building an audience. Similarly, the best leaders know that they must be true to themselves for their workforce to follow their envisioned future. Sometimes this means jettisoning conventional wisdom that calls for leaders to project a facade of calm, respectable authority. Readers always want truth; the people of the enterprise want authenticity.

When leaders and stakeholders align around a bold vision of the future, they are released from the burden of corporate inertia. At that point, it feels like almost anything is possible.

There is, however, one key difference between the novelist and the executive. Novels are usually written by one author, while a company’s vision for the future must be crafted with a huge dose of employee input. Without honest, clear and engaging conversation, the plan will only collect dust on a shelf. When a leader asks the company to mark up a draft, employees are inspired and motivated and begin to own the proprietary future.

Still, a blank document can be intimidating for both a leader and her employees. Once you agree to unhook from old ways of thinking, how do you start writing that first new sentence? Our answer: Try listening. The CEO is out on the factory floor asking, “What do you want for our company’s future?” The bold leader goes beyond this to ask stockholders, customers, vendors and community members the same question.

A bit of business lore can illustrate this point: Decades ago, after Land Rover was split off from its parent company, the new general manager interviewed more than 1,000 employees, asking questions like “What kind of company do you want our brand to be?” and “What do you see as the future of this organization?” This was not a quick corporate survey. It involved months of one-on-one discussions in which the executive listened keenly and generously. After these conversations, the executive (and his team) designed a future that inspired the organization. Later, he acknowledged this work of listening was the most difficult of his long career.

Recently, an Insigniam client took over as president of a fast-moving consumer goods company. Shortly after being promoted, he went on a retreat to do the hard work of envisioning the future. He took all the necessary steps, identifying the company’s drift—the middling position it would reach next year if it continued to follow status-quo approaches and the usual dynamics—and then unhooking from prevailing assumptions.

This leader did not attempt to decipher what past and current market performance meant for his company. He was able to break away from the patterns that leave most executives staring at a future that is little more than an extended version of the past. In other words, he ditched what was in his rearview mirror.

Instead, this leader scripted a proprietary future for the organization that inspired and challenged him. He did this in the form of a very simple, “Here’s where we’re headed” document. Then he began to share that document. In the past year, he has visited five continents and countless countries, having a conversation about the vision of the company’s future with employees at every level and function. After every conversation, he revised the document. Today, it is a work of the highest quality that is moving the organization to new ways of working and thinking.

By accepting that the future is unpredictable and unhooking from the conformist nature of corporate thinking, this executive is moving beyond iterative progress. His company is gearing up to invent markets and create customers who do not currently exist.

Confronting a blank sheet of paper to design and commit to a bold new future is not for the faint of heart. Great leaders must grapple with inchoate ideas, the terrifying reality of a blank page and the always-demanding work of creating something from scratch.

To leave the past and generate a totally new corporate strategy for a business that spans sectors and continents is a difficult process. Once the future is given voice, the words start flowing, and employees begin to be inspired and moved by a vision of the future. When leaders and stakeholders align around a bold vision of the future, they are released from the burden of corporate inertia. At that point, it feels like almost anything is possible.

To slightly alter Dr. Drucker’s famous words for our age of disruption: The only way to survive the future is to create it. So take a deep breath and find your courage: The blank page awaits.

This article appeared in IQ Insigniam Quarterly, with the headline “Write Your Future.” To begin receiving IQ, go here.