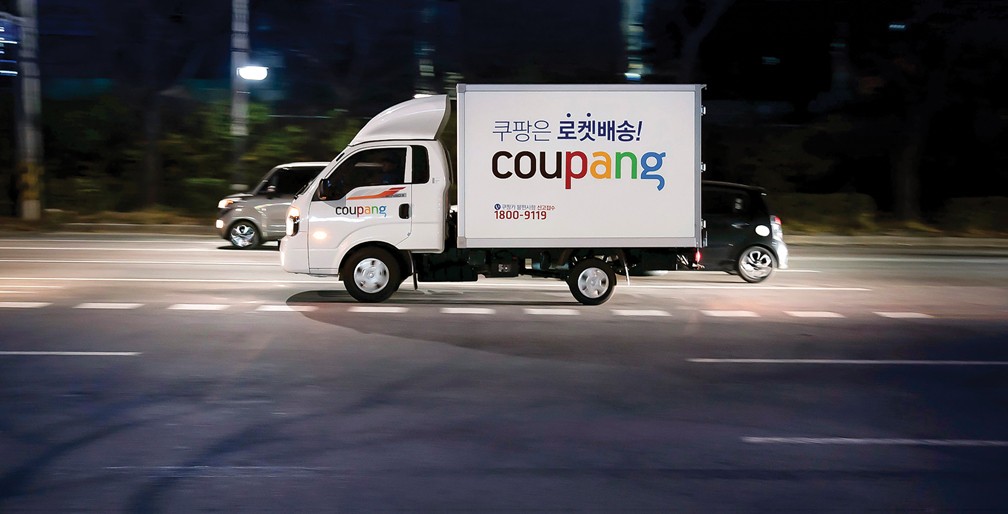 Mention “e-commerce” and it’s likely that the first company that comes to mind is Amazon. The retailer’s reach extends far and wide—and the company continues to grow at a breakneck rate. In a world where innovation and disruption are the norm, there’s a new global star on the rise: Coupang.

Age of most likely users of the platform: 50 and older

Percentage of orders delivered within 24 hours: 99.6

Coupang customers can buy fresh food, electronics, cosmetics, clothing, exercise gear, toys, daily necessities, pet supplies and much more. They can even make payments and watch streaming videos on Coupang. But all of this is not what makes Coupang special. Customers nationwide can order from millions of affordably-priced items by midnight, which will be delivered to their doorsteps by 7:00 the following morning.

“It’s no exaggeration to say we are in nearly every apartment complex and every apartment building at least once a day,” says founder and CEO Bom Kim. Click To Tweet As a result of its laser focus on customer-centricity—and how the company has intertwined this philosophy into its business model—Coupang is fast gaining a reputation as perhaps the most innovative retailer on the globe. By building upon the most successful aspects of other leading companies—like Amazon, UPS, Walmart and DoorDash—Coupang is pushing digital commerce into new territory.

Coupang was ready to pounce. The company has engineered one of the world’s most advanced and innovative logistics and delivery systems. Its end-to-end network includes a fleet of 15,000 directly-employed drivers and more than 100 fulfillment and logistic centers in more than 30 cities across South Korea. Remarkably, 70% of Koreans live within seven miles of a logistics center. Not only can customers receive millions of affordably-priced items on their doorsteps only a few hours after ordering them, but they’re also able to place returns outside their door and have them picked up and credited instantly—and without a box or printing a label.

On the retailer’s website and app, a seemingly endless array of columns and rows display a mind-bending array of products along with colorful graphics. It’s a bit like an old Sears catalog adapted for the modern-day web. Like Amazon, the site offers a robust search function and detailed product information. It leans heavily on discounts and promotions. Icons offer hot deals for different types of products, from kitchenware to sporting goods.

The company’s growth has been nothing short of dazzling. As the most widely used shopping app in South Korea, Coupang has posted 15 consecutive quarters with over 50% year over year constant-currency growth, and the total number of active customers increased 26% year over year to 17 million in the quarter ending June 30, 2021. During the pandemic, it was the only shopping app in South Korea to gain significant market share. It currently controls about one-quarter of the total e-commerce market in South Korea.

And it appears there’s no end in sight. Coupang, which had a market cap of just over $54 billion in September 2021, has watched revenue per active customer zoom upward by 36% in recent months. Meanwhile, small and medium-sized business (SMBs) sales ballooned by 87% year over year. Today, Coupang has more than 50,000 employees, and in mid-2021, it kicked off its global expansion with successful launches in Japan and Taiwan. It also has offices in Beijing, Los Angeles, Seattle, Seoul, Singapore, Shanghai, Mountain View (California), Taipei and Tokyo.

The 42-year-old Mr. Kim was born in South Korea and educated in the U.S. He earned a bachelor’s degree at Harvard University but later quit the MBA program at Harvard Business School.

In 2010, Coupang launched as a Groupon-style promoter of products. The business later morphed into an eBay-inspired framework that tapped a third-party marketplace. All of this was enticing enough to attract US$3.4 billion in venture funding from Sequoia Capital, Softbank, BlackRock and others. Within three years, Coupang had reached US$1 billion in revenue and was heading toward an IPO. However, Mr. Kim opted to withdraw the stock offering and focus on building the company further before going public.

Was the model we built, were the products and services we were providing, making consumers’ jaws drop? The reality was ‘no.’ If we wanted to provide an experience that really mattered to customers, we had to go through an enormous amount of change.”—Bom Kim, Founder & CEO

As he explains, “We had to be honest with ourselves. Once you go public it’s much harder to change your direction. Was the model we built, were the products and services we were providing, making consumers’ jaws drop? The reality was ‘No.’ If we wanted to provide an experience that really mattered to customers, we had to go through an enormous amount of change.”

After all, world-class innovation doesn’t occur by happenstance. The company was reimagined as an end-to-end shopping experience that would span devices and the customer journey. South Korea was the perfect fit, because it’s among the top 10 largest e-commerce markets in the world—and growing rapidly. As a result, Coupang established its own logistics company, Rocket Delivery, which improved upon industry and technology best practices from the likes of UPS and Amazon through its own innovations. In a country with a postal system known for slow and sometimes chaotic performance, Coupang’s idea was to amaze customers and revolutionize their perception about shopping. More than 99% of Coupang orders are delivered within 24 hours.

Like Amazon Prime, Rocket WOW offers unlimited free shipping and deliveries with no minimum, free returns, exclusive discounts, same-day delivery and the Dawn Delivery service that gets packages ordered by midnight on doorsteps by 7:00 the following morning. This includes products as diverse as lobsters and personal computers. “It’s magical,” Mr. Kim says.

This distinctive customer experience is made possible through the billions of dollars invested in technology, infrastructure and processes. For example, Coupang leverages machine learning to forward deploy inventory closer to customers in anticipation of demand. And dynamic orchestration technology predicts and assigns the fastest and most efficient path for every order out of hundreds of millions of combinations of inventory, processing, truck and route options within seconds of the order being placed.

By all accounts, Coupang has succeeded wildly. The company has emerged as the most popular online retailer in South Korea, preventing the likes of Amazon or Alibaba from having a meaningful stake in the region. As it sets its sights on global expansion, Coupang is replicating this success in new markets by doing what it does best—performing faster and better, and by placing the customer at the heart of all they do.